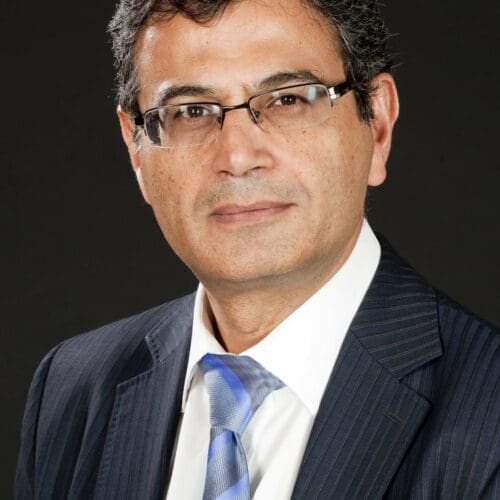 Chair of the Board

Kailash Bhatia is the Professor of Clinical Neurology in the Department of Clinical and Movement Neuroscience at the Institute of Neurology, UCL, Queen Square, London and an Honorary Consultant Neurologist at the affiliated National Hospital for Neurology, Queen Square.

He obtained his medical degree and neurology degree from Bombay University India and obtained further training in neurogenetics and movement disorders with the late Professors Anita Harding and David Marsden at Queen Square London. He is a Fellow of the Royal College of Physicians and corresponding Fellow of the American Academy of Neurology. Kailash’s main research interest is in movement disorders, merging clinical, electrophysiological and genetic methods to study the pathophysiology of movement disorder conditions like Dystonia, Parkinson’s disease and atypical parkinsonian syndromes.

Kailash currently has over 620 peer reviewed publications, several book chapters and has edited 4 books including a large reference tome “Marsden’s book of Movement Disorders” by Oxford University Press (OUP) which was the recipient of the best book in Neuroscience award at the BMA awards in 2013. He is the current and founding editor in chief of Movement Disorders Clinical Practice Journal (MDCP) and has previously been the Associate Editor of Movement Disorders Journal (MDJ). He has served on several International committees of the Movement Disorder Society (MDS) the European Neurological Society (ENS) and the European Federation of Neurological Societies (EFNS) including the International Executive Committee (IEC) of Parkinson’s disease and Movement Disorders Society and their central science programme committee (CSPC). Kailash is on the executive committee for movement disorders for the Association of British Neurology (ABN) and has been an active member of the European Academy of Neurology (EAN), both as a delegate and full individual member. He was the subcommittee chairman of movement disorders when the EAN was formed. He has just completed a term as Secretary-elect of the MDS-European Society (ES) to continue the close collaboration in the education programmes with the EAN and other bodies.